As DJ Khaled careers through the midday traffic clogging New York’s Columbus Circle–one hand on the wheel of a black Rolls-Royce Dawn convertible, the other raising an iPhone to stream his exploits via Snapchat–he lays out the aggressively optimistic, blustery, motivational, tautological and oddly compelling philosophy that guides his vehicular preferences and his life in general.

“You can want a Hyundai, if that’s what you want. Me, I want a Rolls-Royce,” he explains. “I want the drop-top Dawn. I want a Wraith with stars on the roof. I want Phantoms with footrests to massage my toes. That’s what I want, and that’s because we the best.”

As the car pulls up to a stoplight, Khaled looks back at his phone. “Forbes magazine wants to talk to Billy,” he enthuses, using his latest self-assigned nickname, meant to signal his billionaire ambitions and music-chart prowess. “Billboard Billy!”

I gently note that the light has turned green.

“I was ready, my brother, I was ready,” he says, lowering his phone. “So where we going?” 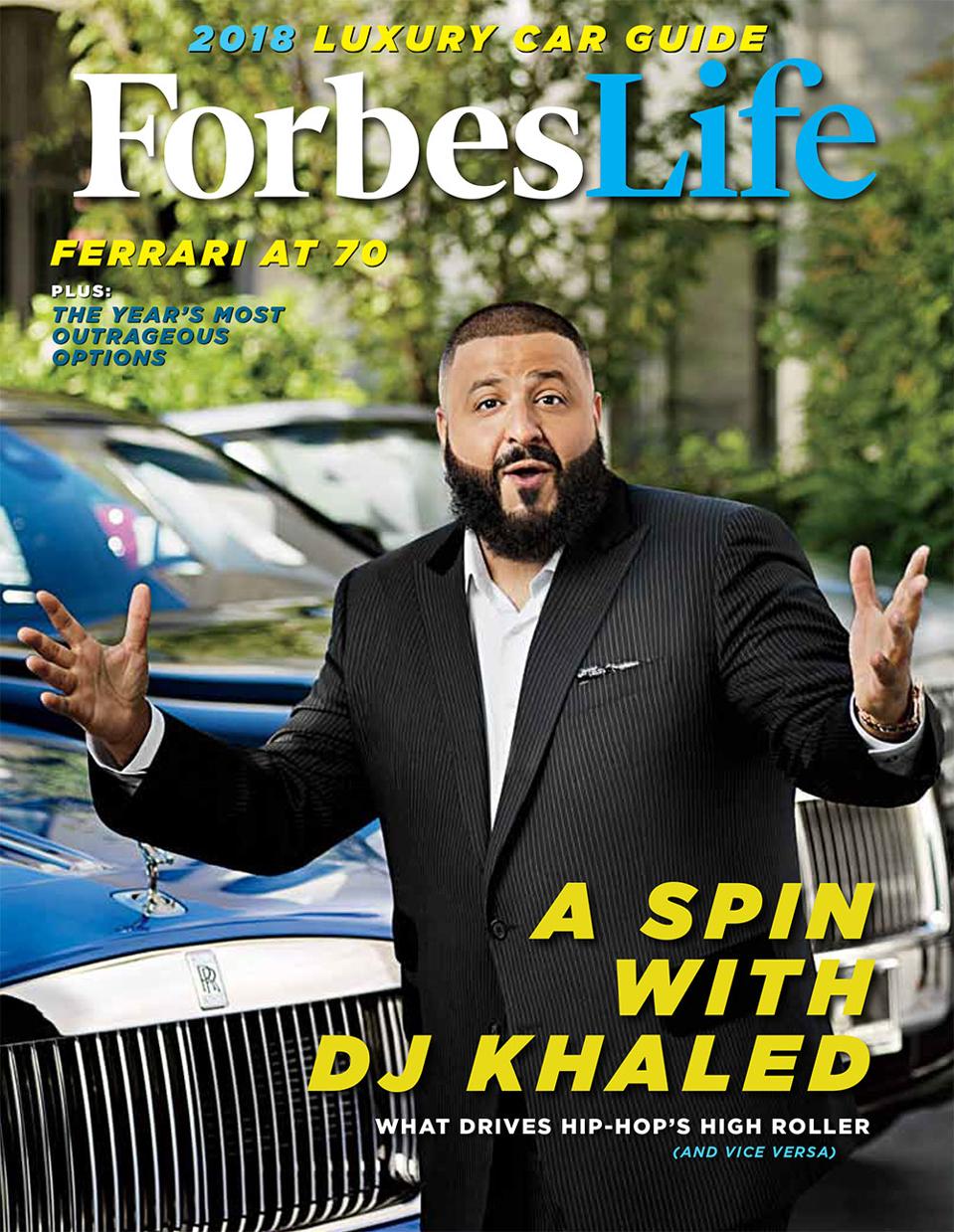 Another One: DJ Khaled continues to add to his Rolls-Royce Collection.

He already knows, of course. We’re off to go car shopping at the Porsche and Bugatti dealerships a little farther downtown. Khaled’s career, meanwhile, is going the opposite direction: all the way up. His last two albums, Major Key, in 2016, and this year’s Grateful, have both gone to No. 1, thanks to collaborations with Drake, Rihanna and Justin Bieber. He also owns several businesses named after his We the Best catchphrase, including a record label, a publishing company and a headphone line. He collects six-figure nightly fees for DJ gigs and millions more from deals with Mentos, Champ Sports, Apple and other brands–arranged by himself and Jay-Z, who signed on as his manager last year after seeing Khaled become a social media superstar with more than 15 million followers across Snapchat, Instagram and Twitter.

“What we are seeing from Khaled now is really who he is; the cameras are just capturing his natural state,” Jay-Z wrote in a section of Khaled’s new bestselling book, The Keys. “That’s why the world is so drawn to him.”

With that success comes scads of cash–$24 million over the past 12 months alone–more than enough to nurture his Rolls-Royce habit. Khaled’s collection, spread across homes in Los Angeles and Miami, includes a 2017 convertible Dawn like the one he’s piloting today (“I always want to feel like I’m at home”), a 2017 Arabian-blue Wraith coupe (“It’s my everyday car”), a 2016 metallic-black Ghost sedan (“I sit in the back seat … that’s when I’m my business”) and the recently unveiled $430,000 Phantom VIII, which claims to have the “most silent” interior of any car in the world (“I’m gonna be one of the first to get it,” Khaled says proudly).

“What I love about Rolls-Royce is, you look at me, it’s like you’re looking at a Rolls-Royce,” says the bearded, barrel-chested 41-year-old Khaled. “It’s just powerful; it’s smooth; it’s iconic.” 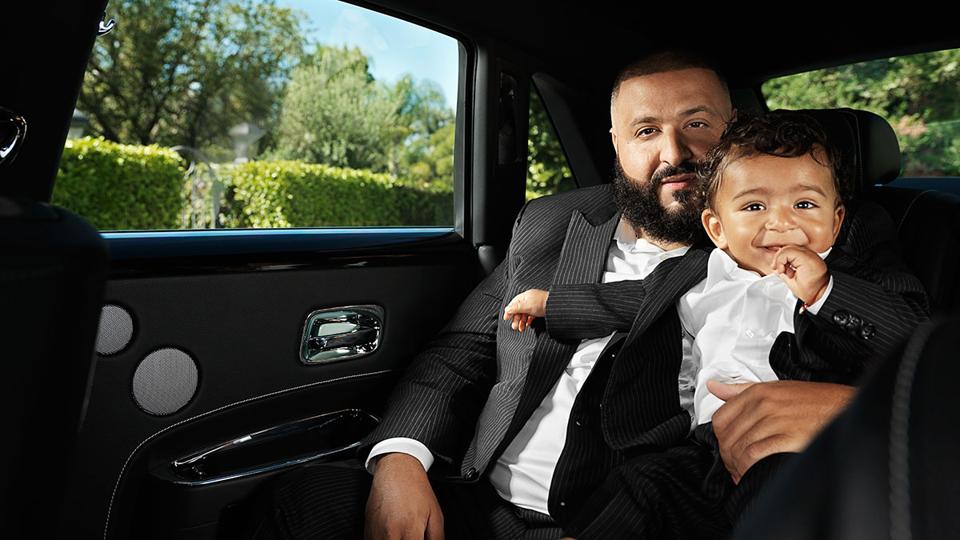 Grateful: DJ Khaled sits in the back seat of one of his three Rolls Royces with his son Asahd.

It’s that sort of unbridled self-assurance that has fueled his steady rise and enabled his late-blooming trajectory. Born Khaled Mohamed Khaled in 1975 to Palestinian immigrants in New Orleans, he grew up in Florida, where he started DJ’ing and selling mixtapes as a teenager. Employing the fake-it-till-you-make-it ethos often celebrated in the hip-hop world, he made a down payment on a new $30,000 red BMW M3 in 1991, tricking it out with a state-of-the-art speaker system.

One day, Khaled was cruising around Miami when he started to smell smoke. He pulled over and got out of the car, thinking one of his amps might have blown. It was a good thing he did: The car soon caught on fire, he says as we weave through midtown in the Dawn. (“DJ Khaled, we the best, baby!” screams a passerby. “That’s right, we the best!” he replies, barely interrupting the flow of his story.) “The car blew up,” he continues. “No lie. Like a movie.”

For his next car purchase, Khaled scaled back considerably, buying a used Honda Civic for about $12,000. By 1995, he was gaining traction as a DJ and producer, opening for legends like Notorious B.I.G. and Nas, and he soon got himself back into an M3–this time a blue one. “Even if I couldn’t make the payment, I just had the mentality–I gotta be in that whip,” he says. “Image is everything.”

For Khaled, that meant retiring cringeworthy aliases like Terror Squadian and Arab Attack and settling on his current nom de DJ. After hosting radio shows in Miami in the late 1990s and early 2000s, he released his first solo record, Listennn … the Album, in 2006, featuring appearances by stars such as Lil Wayne, Kanye West and John Legend. The album underscored Khaled’s primary talent–not singing, rapping or even producing, but bringing together an ensemble cast of popular performers–and went to No. 12 on the charts.

Khaled celebrated by buying a Bentley coupe and then almost immediately upgraded to a baby blue Rolls-Royce Phantom, which cost him $400,000. He supported his new hobby by churning out platinum singles such as the 2010 earworm “All I Do Is Win,” which featured T-Pain, Snoop Dogg, Ludacris and Rick Ross.

“My Phantom was the hottest Phantom in the game,” he says. “After that, I didn’t stop. I’ve been Rolls-Royce ever since.”

Khaled says the reason he loves the brand is that he feels equally comfortable driving or being driven in a Rolls; he usually has a driver operate his Ghost and pilots the Wraith himself. And, yes, there are stars on the ceiling; contrary to popular belief, it’s a standard option, not a custom request.

While some ultraluxury brands have alienated hip-hop’s new elite (in 2006, one of the executives behind Cristal champagne famously told The Economist, “What can we do? We can’t forbid people from buying it,” prompting a Jay-Z boycott), Rolls-Royce has wisely embraced its popularity among rap stars. The company sometimes provides Khaled with vehicles when he’s traveling for high-profile events, and Rolls has been rewarded with product placement in his videos and social media feeds.

“He’s an enthusiastic, evangelical Rolls-Royce owner,” says Gerry Spahn, head of communications for the Americas at Rolls-Royce, “and we’re thrilled that he wants to be associated with the best of the best.” 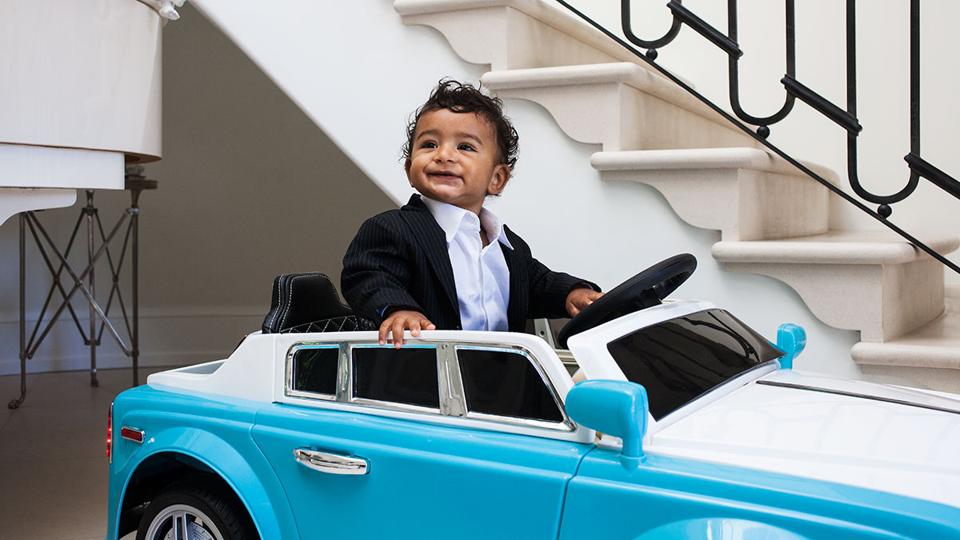 Ready To Roll: DJ Khaled’s son, Asahd, has yet to celebrate his first birthday–but he’s already got a Rolls Royce of his own.

If Khaled’s automotive preference isn’t clear from the composition of his collection (his only luxury cars without a Flying Lady on the hood: a Cadillac Escalade and a Range Rover), he makes it clear as we pull up to the Bugatti dealership. He refuses to go inside, despite the fact that we’d planned test-drives ahead of time. (“I’d rather be in a Rolls.”) After some prodding, he agrees to visit the Porsche showroom next door.

Upon entering, I ask Khaled what he thinks of the mahogany Cayenne E-Hybrid SUV on display. “What’s that?” he inquires. I point to the vehicle next to him and explain that its motor is powered by both gasoline and electricity. His response: “I don’t know nothing about it.” We stroll through the showroom, shifting gazes from a gleaming Panamera 4 sedan to a lean Macan GTS SUV to a menacing 911 GT3 that goes from 0-60 in 3.2 seconds. But he doesn’t even want to go for a test-drive.

“I’m a big boy,” he says. “That interior got to be fit for a big boy, you know what I’m saying? … Maybe you should buy me one, and I’ll tell you how I like it after that.”

The only car Khaled really wants is the one he’s already ordered: the new Phantom, redesigned for only the eighth time since its debut in 1925. The mansion-on-wheels comes with a 7.5-liter, 563-hp, V12 twin-turbo engine, Eames-chair-inspired seats and even a dashboard “gallery” designed to accommodate slivers of bespoke artwork.

For DJ Khaled, though, it’s not just the physical appointments that inspire his loyalty to Rolls-Royce. The company impressed him, he explains, by sending him a free Rolls-branded child seat when his son, Asahd, was born last winter.

Jada Pinkett Smith’s announcement earlier this month that she was bringing herself to her infamous red table in service of “some healing that needs to happen” was always guaranteed to make some waves. Even if […]

The reason we are posting this story is so that you can know the salary potential in Hollywood! We hope that this makes you start to think and dream bigger! Most large media companies – […]