On March 5, 2006 “It’s Hard out Here for a Pimp” a song written by hip hop group Three 6 Mafia and Cedric Coleman as the theme song to the film Hustle & Flow won an Academy Award for Best Original Song. It was ranked #80 on VH1’s “100 Greatest Songs of Hip Hop”.

At the 78th Academy Awards in 2006, Three 6 Mafia and Henson performed the song shortly before it won the Academy Award for Best Original Song. Howard did not wish to perform at the ceremony, and since two of the song’s writers are themselves artists in the form of the trio Three 6 Mafia, they were given the opportunity to perform it. In the live performance, the word “bitches” was replaced by “witches” in the chorus. Three 6 Mafia became the first hip hop group to win an Academy Award for Best Original Song, and the first hip hop artists to perform at the ceremony. It was the second hip hop song to win an Oscar, after Eminem’s “Lose Yourself”, from the film 8 Mile (2002).

This song became the third in five years to win the Oscar without a Golden Globe Award nomination. The others were “If I Didn’t Have You” from Monsters, Inc. (2001) and “Al Otro Lado del Río” from The Motorcycle Diaries (2004). 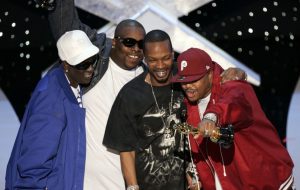 ETI would like to wish everyone a Happy 3/16 Day

There have been many memorable and timeless catchphrases throughout WWE history, but few have altered the very fabric of reality quite like “Austin 3:16.” Because of the impact of this phrase, March 16 is officially […]