WrestleMania III was the third annual WrestleMania professional wrestling pay-per-view (PPV) event produced by the World Wrestling Federation (WWF). The event was held on March 29, 1987, at the Pontiac Silverdome in Pontiac, Michigan. There were twelve matches, with the final event being WWF World Heavyweight Champion Hulk Hogan successfully defending his title against André the Giant.

WrestleMania III is particularly notable for the WWF’s claiming a record attendance of 93,173 and the largest recorded attendance of a live indoor event in North America at the time. This record itself stood until February 14, 2010 when it was surpassed by the 2010 NBA All-Star Game, and the only WWF/E event with an official higher attendance was WrestleMania 32. Both of the latter events were held at AT&T Stadium. The event is considered to be the pinnacle of the 1980s wrestling boom. The WWF generated $1.6 million in ticket sales. Almost one million fans watched the event at 160 closed circuit locations in North America. The number of people watching via pay-per-view was estimated at several million, and pay-per-view revenues were estimated at $10.3 million, setting a record for the time. 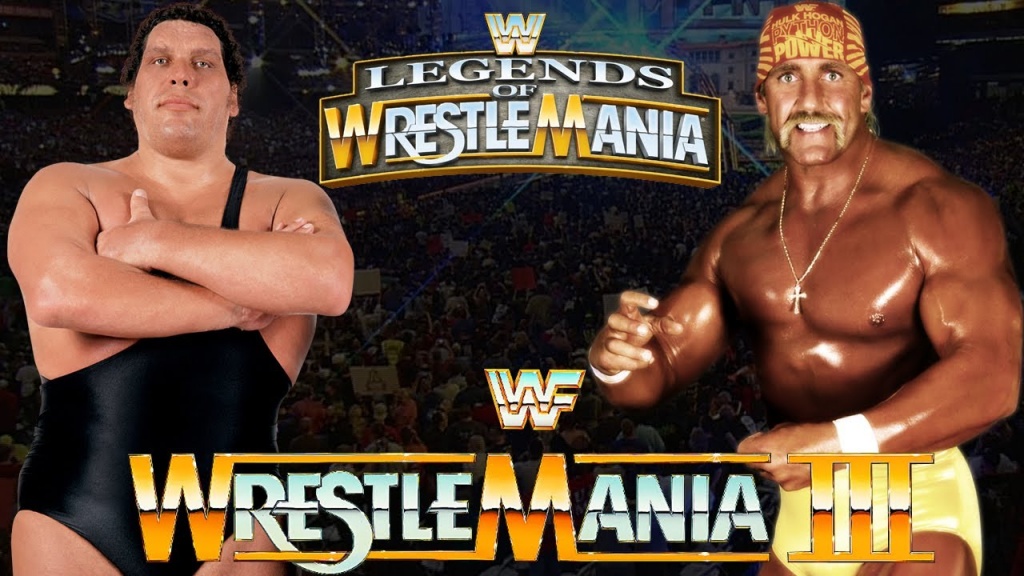 The event has received positive reviews. In the years after WrestleMania III, the Savage vs. Steamboat match has been ranked by critics and other wrestlers as one of the greatest matches in professional wrestling. Pro Wrestling Illustrated and Wrestling Observer Newsletter named it 1987’s Match of the Year. IGN ranked it at number 6 in their Top 20 Matches in WrestleMania History. Steamboat described the match as “the moment in time that defined me as a wrestler.” Thomas Golianopoulos of Complex Sports ranked it at number two in his list of the 50 Greatest Matches in WrestleMania History, citing that “Both guys worked lightning fast and everything from Steamboat’s aggressiveness to the involvement of George “The Animal” Steele played off their part.” Current WWE superstar David Otunga picked it as WWE.com’s Five-Star Match of the Week in December 19, 2012.

Incidentally, the Hogan vs. Andre match received a negative four star rating from Dave Meltzer and the Wrestling Observer Newsletter named it the “Worst Worked Match of the Year.”

There have been numerous claims since WrestleMania III that the quoted attendance figure of 93,173 which established a world record attendance for an indoor event, was false and that the real attendance figure was only around 78,000. This is based on claims by Dave Meltzer upon receiving information from the events promoter Zane Bresloff, and that wrestling promoters (including Vince McMahon) were known to regularly inflate attendance figures to make things look better. While the WWE and Silverdome management have always maintained that the 93,173 figure is correct, debate continues among wrestling fans as to what the true attendance was on the day. Also, Meltzer claimed that the 1992 SummerSlam at Wembley did 79,127, more than WrestleMania III. The record would be decisively broken by WrestleMania 32 in 2016.

This Day in Entertainment History featuring Michael Jackson and his Moonwalk

The date was March 25, 1983 when The King of Pop shocked the world and debuted his now famous Moonwalk dance in front of a packed audience at the Pasadena Civic Auditorium in Pasadena, California. […]