Federal prosecutors said Monday they have charged two men in connection with the 18-year-old unsolved murder of Run-DMC DJ Jam Master Jay, while suggesting the artist, celebrated for his anti-drug stance, may have been ambushed over a cocaine deal.

The suspects in the nearly two-decade-old murder, one of New York’s most enduring cold cases, were identified as Ronald Washington and Karl Jordan Jr. in a 10 count indictment unsealed Monday.

Washington is currently serving a federal prison sentence stemming from a string of robberies he committed while on the run from police after Jay’s 2002 murder. Jordan is also charged with engaging in an alleged cocaine distribution conspiracy in 2017.

“This is a case that has been around for a long time,” acting U.S. Attorney Seth DuCharme said at a news conference in New York announcing the charges, according to The Associated Press.

Five years after the crime, Washington – who had reportedly been living on a couch at Jay’s home in the days before the murder – was named as a suspected accomplice, but was never convicted. According to prosecutors at the time, Washington “pointed his gun at those present in the studio, ordered them to get on the ground and provided cover for his associate to shoot and kill Jason Mizell,” Jam Master Jay’s real name.

“They walked in and murdered him in cold blood,” DuCharme said. “The charges announced today begin to provide a measure of justice to the family and friends of the victim, and make clear that the rule of law will be upheld, whether that takes days, months or decades.” 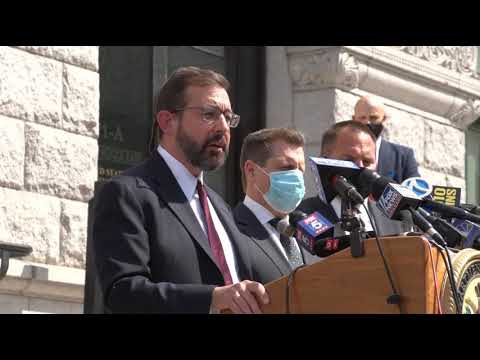 Police identified at least four people in the studio with Mizell, including the two gunmen. The city and Mizell’s friends offered more than $60,000 in reward money, but witnesses refused to come forward and the case went cold.

Washington also was a suspect in the 1995 murder of Randy “Stretch” Walker, a former close associate of the late rapper Tupac Shakur, who was also murdered.

Washington and Jordan were engaged in a conspiracy to distribute five kilograms of cocaine at the time of Jay’s killing, according to their indictment.

Prosecutors did not say at the conference if Jay had any role in the conspiracy, but a news release about the indictments revealed that the motive involved Mizell’s acquisition of 10 kilograms of cocaine from a narcotics supplier in the Midwest.

The cocaine was allegedly intended to be distributed in Maryland by Washington, Jordan and other co-conspirators, but Mizell had recently informed Washington that he, Washington, would not be involved in distributing the drugs in Maryland. That precipitated the murder conspiracy, according to the release.

If convicted, Washington and Jordan each face a mandatory minimum sentence of 20 years in prison and a maximum of life in prison, or the death penalty. Prosecutors said in court papers that Attorney General William Barr had not yet decided whether to seek the death penalty.

Jordan is scheduled to be arraigned on Monday via teleconference, a precautionary measure related to the coronavirus. Washington, who is imprisoned in Kentucky, will be arraigned later this week, prosecutors said.

Mizell, known professionally as Jam Master Jay, was a member of Run-DMC, the hip-hop sensation behind hits such as “It’s Tricky” and the Aerosmith remake/collaboration “Walk This Way,” which fused rap and rock ‘n’ roll.

Jay was shot in the head at close range with a .40-caliber bullet by a masked assailant at his studio in the Queens neighborhood where he grew up.

The other person in the room, 25-year-old Urieco Rincon, was shot in the ankle but survived.

Witnesses at the time described the shooter as a young black man in a white sweatsuit or sweatshirt, according to CNN and WABC in New York. Police said two gunmen were buzzed into the building, went up to the second-floor studio and shot Mizell once.

The 2018 Netflix documentary “ReMastered: Who Killed Jam Master Jay?” included interviews with several of Mizell’s friends, family members and acquaintances, who talked about what they’ve heard regarding suspects in his murder. But the film didn’t come to a conclusion who committed the crime.

Mizell joined Run (Joseph Simmons) and DMC (Darryl McDaniels), all natives of Queens, in 1982, spinning turntables for the two rappers who had just graduated from high school. A year later, the pioneering group released its first single, “It’s Like That.”

Jam Master Jay provided the thumping beats behind Rev. Run and DMC’s rhymes and the trio became one of the biggest and most influential hip-hop groups of the 1980s, credited with breaking rap music into the mainstream.

Run-DMC was the first rap group to be nominated for a Grammy Award, and the first rappers to have gold, platinum and multi-platinum albums.

In 2016, the Recording Academy announced Run-DMC would receive one of the year’s lifetime achievement awards: Rev. Run took to Twitter to declare the group the “first rappers” to receive the honor.

Why you need to know who Kosine is! He produced Nicki Minaj’s ‘Anaconda’ as well as for Joe Biden

Around 9 p.m. on Sunday night, in the middle of MTV’s Music Video Awards, the Biden-Harris campaign debuted a new advertisement. The spot was accompanied by a jaunty, percussive soundtrack, all whistles, parade drumming, and […]

Coachella 2019 Lineup & Schedule: All the Set Times You Need To Know

The Coachella Valley Music and Arts Festival begins today (April 12) and runs through Sunday (April 14). The festival kicked off from April 12-14. (It returned with the same lineup, with the addition of Kanye […]

A late entrant into the Oscar documentary race could prove a formidable contender. Amazing Grace, which documents the live recording of Aretha Franklin’s gospel album in 1972, had been mired in technical and legal limbo for […]