Chuck Berry was an American guitarist, singer and songwriter and was one of the pioneers of rock and roll music who died March 18, 2017.

A pioneer of rock and roll, Berry was a significant influence on the development of both the music and the attitude associated with the rock music lifestyle. With songs such as “Maybellene” (1955), “Roll Over Beethoven” (1956), “Rock and Roll Music” (1957) and “Johnny B. Goode” (1958), Berry refined and developed rhythm and blues into the major elements that made rock and roll distinctive, with lyrics successfully aimed to appeal to the early teenage market by using graphic and humorous descriptions of teen dances, fast cars, high school life, and consumer culture, and utilizing guitar solos and showmanship that would be a major influence on subsequent rock music. His records are a rich storehouse of the essential lyrical, showmanship and musical components of rock and roll. In addition to the Beatles and the Rolling Stones, a large number of significant popular-music performers have recorded Berry’s songs. Though not technically accomplished, his guitar style is distinctive—he incorporated electronic effects to mimic the sound of bottleneck blues guitarists and drew on the influence of guitar players such as Carl Hogan, and T-Bone Walker to produce a clear and exciting sound that many later guitarists would acknowledge as an influence in their own style. Berry’s showmanship has been influential on other rock guitarists, particularly his one-legged hop routine, and the “duck walk”, which he first used as a child when he walked “stooping with full-bended knees, but with my back and head vertical” under a table to retrieve a ball and his family found it entertaining; he used it when “performing in New York for the first time and some journalist branded it the duck walk.” 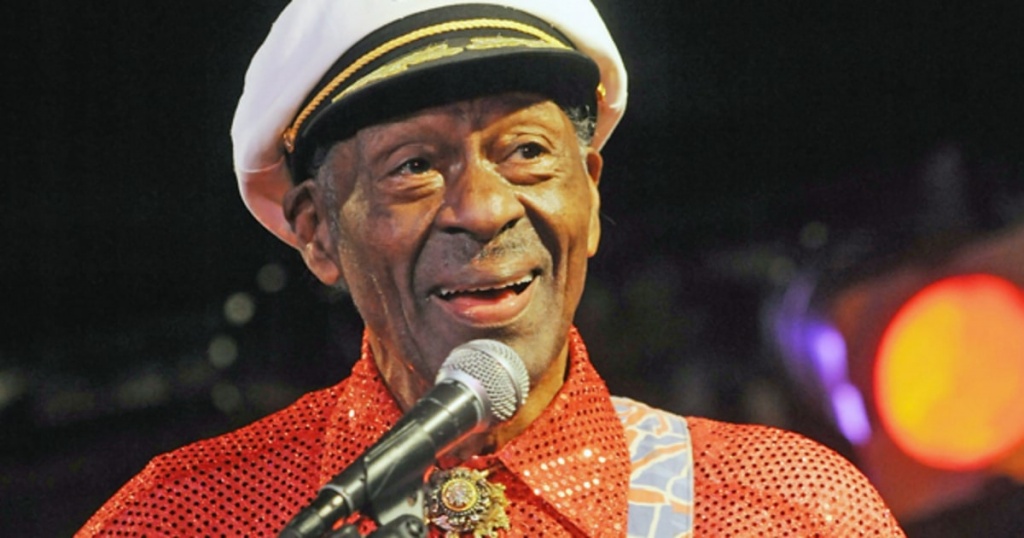 The rock critic Robert Christgau considers Berry “the greatest of the rock and rollers,” while John Lennon said, “if you tried to give rock and roll another name, you might call it ‘Chuck Berry’.” Ted Nugent said, “If you don’t know every Chuck Berry lick, you can’t play rock guitar.”

When asked what caused the explosion of the popularity of rock ‘n roll that took place in the 1950s, with him and a handful of others, mainly him, Berry said, “Well, actually they begin to listen to it, you see, because certain stations played certain music. The music that we, the blacks, played, the cultures were so far apart, we would have to have a play station in order to play it. The cultures begin to come together, and you begin to see one another’s vein of life, then the music came together.”

Among the honors Berry has received are the Grammy Lifetime Achievement Award in 1984 and the Kennedy Center Honors in 2000. He was ranked seventh on Time magazine’s 2009 list of the 10 best electric guitar players of all time. On May 14, 2002, Berry was honored as one of the first BMI Icons at the 50th annual BMI Pop Awards. He was presented the award along with BMI affiliates Bo Diddley and Little Richard. In August 2014, Berry was made a laureate of the Polar Music Prize.

The journalist Chuck Klosterman has argued that in 300 years Berry will still be remembered as the rock musician who most closely captured the essence of rock and roll.

In order to be a legend you have to learn from and study the legends. A legend today is known for their noted celebrity and larger-than-life accomplishments, whose fame is well-known. Joe was the father […]

In order to be a legend you have to learn from and study the legends. A legend today is known for their noted celebrity and larger-than-life accomplishments, whose fame is well-known. John Singleton, the first […]