George H.W. Bush began the last day of his life with three eggs for breakfast and ended it by telling his son he loved him.

James Baker, a close friend who served as secretary of state under the 41st president, told CNN’s “State of the Union” that he stopped by Bush’s home Friday morning and that Bush woke up and ate a big breakfast.

Bush, 94, had been bedridden for several days and struggled to speak, Baker said. He appeared more alert than usual Friday morning, Baker said.

“We all began to think, well, here we are, he is going to surprise us again, it’s another bounce-back day,” Baker said.

But Baker said that when he returned that evening, Bush had weakened greatly. Baker said he spent the last of Bush’s hours with him as the former president spoke on the phone to family members, saying his goodbyes.

Baker called Bush Sr. underappreciated, describing him as the best one-term president in history. He called Bush his best friend and “a beautiful, beautiful human being.”

The nonprofit Points of Light foundation, founded by the former president to encourage people around the world to solve its problems through service, urged people to pay homage to Bush through a day of service.

“I encourage those paying tribute to President Bush to take a moment to pledge their service and recognize the service of others,” said Natalye Paquin, the group’s executive director. “To become their own point of light in communities around the world.” 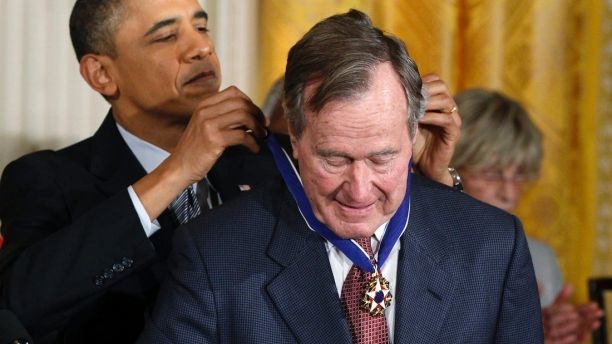 Bush’s remains will be flown Monday morning from Ellington Field in Houston to the Joint Base Andrews military facility in Maryland. The public will be able to pay its respects to Bush from 7:30 p.m. Monday to 8:45 a.m. Wednesday at the U.S. Capitol Rotunda in Washington.

A state funeral will be held at the Washington National Cathedral, beginning at 11 a.m. Wednesday. It will be the first presidential funeral since Gerald Ford died in 2006.

President Donald Trump and first lady Melania announced they will attend the funeral. Wednesday will be a national day of mourning, Trump declared, and federal agencies and departments will close “as a mark of respect” for Bush.

“President George H.W. Bush led a long, successful and beautiful life,” Trump tweeted Saturday. “Whenever I was with him I saw his absolute joy for life and true pride in his family. His accomplishments were great from beginning to end. He was a truly wonderful man and will be missed by all!”

Bush’s remains will be returned to Houston on Wednesday afternoon. A funeral service is planned at St. Martin’s Episcopal Church in Houston on Thursday.

Thursday, the president’s casket will be taken by train to College Station, Texas, accompanied by Bush family members and close friends. A funeral procession will travel on George Bush Drive toward the Bush Library complex.

Bush will be buried Thursday in a family plot behind the George H.W. Bush Presidential Library and Museum at Texas A&M University, alongside his wife of 73 years and former first lady, Barbara, and daughter Robin, university officials said in a statement Saturday.

In order to be a legend you have to learn from and study the legends. A legend today is known for their noted celebrity and larger-than-life accomplishments, whose fame is well-known. Chuck Berry was an […]

In order to be a legend you have to learn from and study the legends. A legend today is known for their noted celebrity and larger-than-life accomplishments, whose fame is well-known. WWE Hall of Famer […]