Nancy Wilson, whose skilled and flexible approach to singing provided a key bridge between the sophisticated jazz-pop vocalists of the 1950s and the powerhouse pop-soul singers of the 1960s and ’70s, died on Thursday, December 13, 2018 at her home in Pioneertown, Calif. She was 81.

Her death was confirmed by her manager, Devra Hall Levy, who said Ms. Wilson had been ill for some time; she gave no other details.

“I have a gift for telling stories, making them seem larger than life,” she told The Los Angeles Times in 1993. “I love the vignette, the plays within the song.”

Some of Ms. Wilson’s best-known recordings told tales of heartbreak, with attitude. A forerunner of the modern female empowerment singer, with the brassy inflections and biting inflections to fuel it, Ms. Wilson could infuse even the saddest song with a sense of strength.

In her canny signature piece from 1960, “Guess Who I Saw Today” (written by Murray Grand and Elisse Boyd), a woman baits her husband by dryly telling him a story in which he turns out to be the central villain. In her 1968 hit, “Face It Girl, It’s Over” (by Francis Stanton and Angelo Badale), Ms. Wilson first seems to throw cold water in the face of a deluded woman who fails to notice that her lover has lost interest in her. Only later does she reveal that she is the benighted woman scorned.

“Face It Girl,” an epic soul blowout, became one of Ms. Wilson’s biggest chart scores, making the Top 30 of Billboard’s pop chart and Top 15 on its R&B list.

Her biggest hit came in 1964, when “(You Don’t Know) How Glad I Am” (Jimmy Williams and Larry Harrison), a rapturous R&B ballad delivered with panache, reached No. 11 on Billboard’s pop chart.

Three years later she became one of the few African-Americans of her day to host a TV program, the Emmy-winning “Nancy Wilson Show,” on NBC.

A hardworking and highly efficient singer, Ms. Wilson released more than 70 albums in a five-decade recording career. She won three Grammy Awards, one for best rhythm and blues recording for the 1964 album “How Glad I Am,” and two for best jazz vocal album, in 2005 and 2007. In 2004, she was honored as a Jazz Master by the National Endowment for the Arts.

Nancy Wilson’s album “How Glad I Am,” from 1964, won a Grammy Award for best rhythm and blues recording. 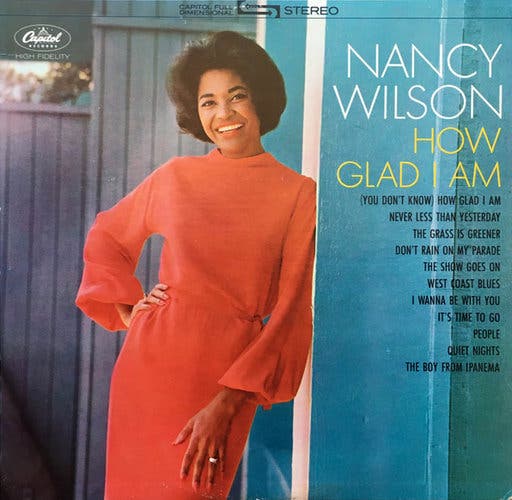 For her lifelong work as an advocate of civil rights, which included participating in a Selma to Montgomery, Ala., protest march in 1965, she received an award from the Martin Luther King Jr. Center for Nonviolent Social Change in Atlanta in 1993 and an N.A.A.C.P. Hall of Fame Image Award in 1998.

As a lonely college student away from home for the first time in the 1960’s, I would put myself to sleep with a stack of Nancy Wilson albums. Oh how I loved that voice. Even though my musical taste was more in the rock and folk genre it was Ms. Wilson’s melodic tone that would get me through hard times. The greatest thrill I ever experienced was to hear her live at a memorial service for Julian Adderley at Florida A&M university. Her passing is another milestone in American music. She will be missed.

In 2005, she was inducted into the International Civil Rights Walk of Fame at the Martin Luther King Jr. National Historic Site, also in Atlanta.

“As an artist then, taking such a political stand came with professional risks,” she told the blog Jazz Wax in 2010. “But it had to be done.”

Nancy Sue Wilson was born on Feb. 20, 1937, in Chillicothe, Ohio, the first of six children of Olden Wilson, a supervisor at an iron foundry, and Lillian (Ryan) Wilson, a maid. Her father introduced her to records by mainly male artists, like Nat King Cole, Billy Eckstine and Jimmy Scott, when he sang with Lionel Hampton’s Big Band. “Much of my phrasing is so similar to Jimmy Scott’s,” Ms. Wilson told the The Los Angeles Times.

Nancy Wilson with her Grammy Award in 2005 for best jazz vocal album, “R.S.V.P. (Rare Songs, Very Personal).” “I don’t put labels on it, I just sing,” she said of her musical style. “It’s all in the ear of the listener. Let them decide.” 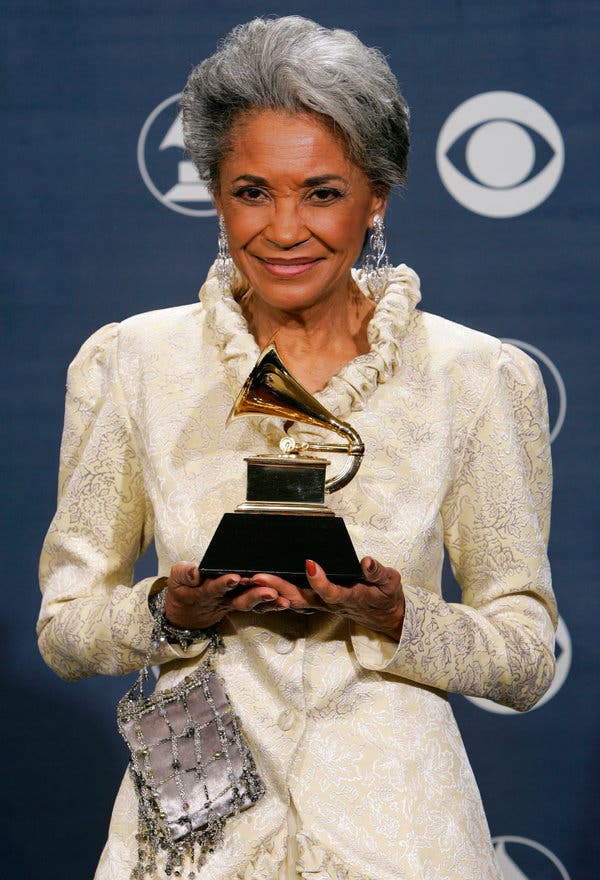 She sang avidly from the age of 4, and by the time she was 10 she was the lead singer in the local choir. She had no formal training. “It’s all natural,” she told Jazz Wax.

As a teenager, Ms. Wilson became entranced by the female singers she heard on a local jukebox, especially Dinah Washington, whose ear for irony and keen sense of drama affected her deeply.

“The general humor is a lot of Dinah,” Ms. Wilson said of her style in an interview for the National Endowment for the Arts’ website in 2004. As the inspiration for her glamorous presentation, she cited Lena Horne.

At 15, while she was still a student at West High School in Columbus, Ohio, Ms. Wilson entered a talent contest held by the local television station WTVN; it led to regular appearances twice a week on its show “Skyline Melodies.” Until her graduation, she sang at nightclubs, sometimes with Sir Raleigh Randolph and His Sultans of Swing, an 18-piece band.

Ms. Wilson spent one year at Central State College in Ohio before dropping out to pursue music full time. She honed her skills by touring continuously in the Midwest and Canada with Rusty Bryant’s Carolyn Club Big Band, with which she cut her first recordings, for Dot Records. Seven years passed before she felt ready to move to New York, in 1959.

Ms. Wilson arrived in New York with three goals: to be signed by the influential jazz manager John Levy, who worked with the saxophonist Cannonball Adderley and the British pianist George Shearing; to be signed by Capitol Records, the home of singers like Nat King Cole and Peggy Lee; and to record her first album with the producer David Cavanaugh, who worked with those singers.

Within five months she fulfilled all three goals, even while holding down a day job as a secretary at the New York Institute of Technology. A high-profile gig at the Blue Morocco club led to the contract with Mr. Levy, who got her the label deal, which connected her with Mr. Cavanaugh to produce her debut album in 1960, “Like in Love,” with splashy arrangements by Billy May.

Ms. Wilson’s style impressed the critics. Writing in Downbeat in 1965, Leonard Feather hailed her performance at the Shrine Auditorium in Los Angeles as an “extraordinary demonstration of the attainment, by a splendid singer, of an almost unprecedented mixture of commercial appeal, physical and music charm, and artistic integrity.”

Live performances, particularly in intimate nightclubs, where audiences could see her gestures, became a hallmark. “Audiences want to see a song as well as hear it,” Ms. Wilson told Jazz Wax. “Part of what I do is in my body language, my hands, my arms. You miss a lot by just hearing my voice.”

At the same time, Ms. Wilson worked tirelessly in the studio, releasing three albums in a single year during her prime. She also made many guest appearances on television, singing on variety shows like “The Ed Sullivan Show” and “The Tonight Show,” and acting in hit series (“I Spy” and “Room 222”).

She used her prominence to break down racial stereotypes. “That’s what I loved about doing ‘The Carol Burnett Show,’ ” she said. “I didn’t have to play ‘black characters.’ I could just do comedy, which I loved.”

Ms. Wilson’s music moved with the times. She cut songs written by the Beatles and Stevie Wonder on her 1966 album “A Touch of Today,” and later incorporated disco and R&B styles before moving back to jazz on her later albums, culminating in “Turned to Blue” in 2006.

Ms. Wilson’s marriage in 1960 to the drummer Kenny Dennis ended in divorce a decade later. In 1973, she married Wiley Burton, a Presbyterian minister, and remained with him until his death in 2008.

Ms. Wilson remained proud of her holistic approach to music, preferring to call herself a “song stylist” rather than a follower of any genre. “I don’t put labels on it, I just sing,” she told The Los Angeles Times. “It’s all in the ear of the listener. Let them decide.”

Legendary actress Cicely Tyson, who trailblazed in TV and film for more than seven decades, dies at 96

Royal. Legendary. A queen. Those are the adjectives often invoked at the mention of Cicely Tyson’s name. The actress and cherished icon, who was first Oscar-nominated for 1972’s “Sounder” and 45 years later was honored with an honorary […]

In order to be a legend you have to learn from and study the legends. A legend today is known for their noted celebrity and larger-than-life accomplishments, whose fame is well-known. Dame Elizabeth Taylor was […]