Ben’s Chili Bowl has accomplished a lot in the last 60-plus years. It’s fed everyone from leaders of the civil rights movement to entertainment superstars to busloads of hungry tourists. Its owners have launched a charitable foundation, collected awards, and expanded the operation from one location to eight.

Now Ben’s may do something it’s never done: Close.

“We’re suffering a great deal. It’s very, very, very difficult for us right now,” says Virginia Ali, who co-founded the restaurant with her late husband Ben Ali. Apart from Thanksgiving and Christmas, the original U Street location has been open every day since 1958.

Ben’s Chili Bowl has weathered past recessions. It has survived civic unrest and held out as the blocks around it gentrify. But as the coronavirus keeps public life shut down, the restaurant is facing its toughest challenge yet.

All Chili Bowl locations except the original are currently closed. Company revenue has plummeted. Three-quarters of staff are at home. The Ali family is waiting to learn whether the second dose of funding from the federal Paycheck Protection Program will bring relief, after none came in the first round. And as the family struggles to keep the grill hot, the Chili Bowl joins thousands of restaurants in the region trying to get by on curbside pickup and delivery.

Hundreds of restaurants in the D.C. area have already closed, at least temporarily. Eight million people in the restaurant industry nationwide — two-thirds of its workforce — are out of work. Eateries that survived 9/11 and the Great Recession are closing. One in five may never re-open. Those that make it through this pandemic may be markedly different from how we remember them. And some simply will not be there at all.

Through the tilted glass windows of Ben’s on a recent Saturday, the scene looks listless. A solitary mask-clad customer waits inside for his to-go order.

But through the door, the mood is more upbeat. Employees heartily greet new customers. Teena Marie plays loudly over the store’s stereo. If you avoid looking at the empty, taped-off booths, you might think it was a regular Saturday. 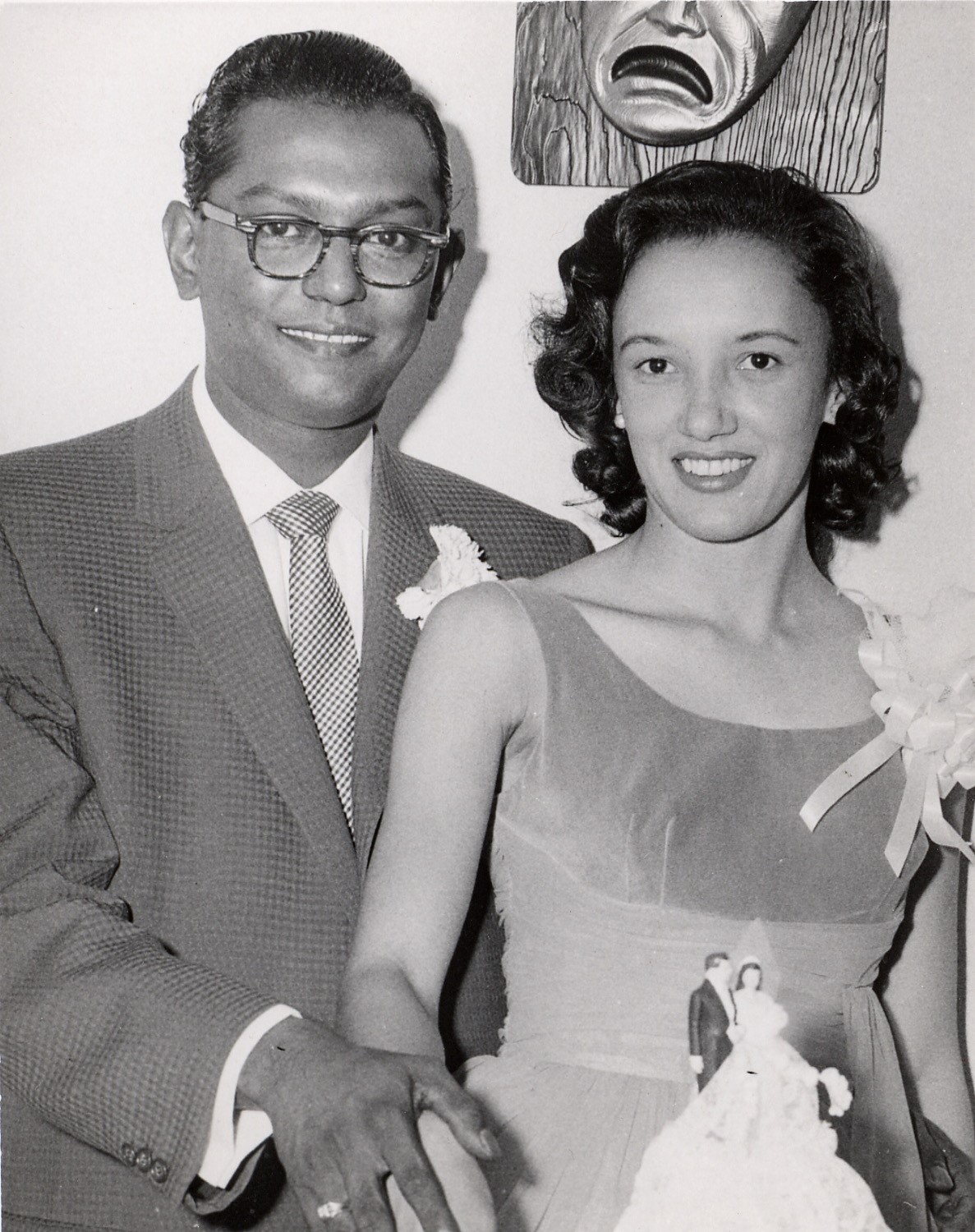 Ben and Virginia Ali were married in 1958, the year they opened the Chili Bowl.

Washingtonians know Ben’s Chili Bowl for its history at least as much as its half-smoke. The hot dog hub opened in 1958, when Mahaboob Ben Ali decided to enter the restaurant business. Ali moved to the U.S. from Trinidad in 1945 to become a doctor, studying first at the University of Nebraska and eventually at Howard University. After leaving Howard’s dental school due to an ongoing back injury (he’d fallen down an elevator shaft at the University of Nebraska), Ben took his career in a new direction.

Around the same time, Virginia, now 86, was working at the Industrial Bank of Washington, a minority-owned bank at 11th and U Streets. Ben kept stopping by, she says.

“He being the very, very confident person that he was, on his third visit, three days in a row, he eventually wrote a little note that said, ‘Please call me,’” Virginia says.

The couple married the same year they opened the Chili Bowl. It was an alternative to the bevy of hamburger joints in town, Virginia says. They chose a narrow building on U Street that had once been a silent-movie house, a vaudeville theater, and a pool hall. To reconfigure the place into a restaurant, the Alis hired workers from the community. 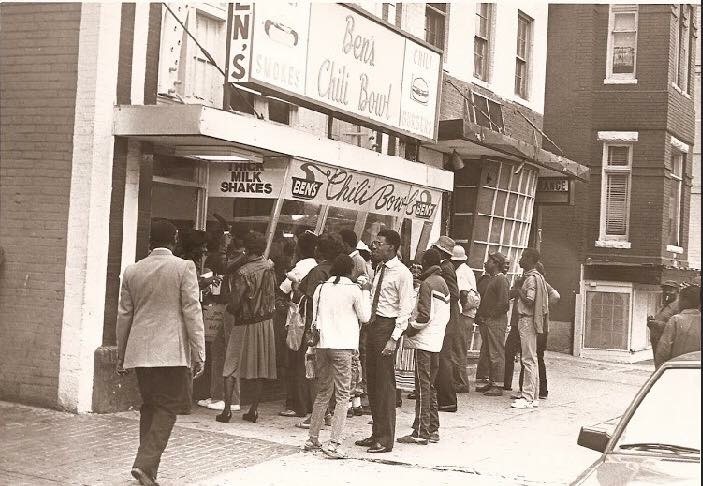 Ben’s Chili Bowl, seen here in an undated photo, remained open and unharmed through the 1968 riots.

‘A Place That Everyone Knew’

“Community” is a word Virginia says nearly two dozen times as we talk. The community, she says, welcomed the restaurant when it opened on Black Broadway — a fulcrum of African-American life in the city — with artists such as Duke Ellington, Sarah Vaughan, and Johnny Mathis stopping by after performances at the nearby Howard Theatre or Lincoln Theatre ballroom. The restaurant fed attendees of the 1963 March on Washington. And the Alis were there on April 4, 1968, when someone ran into the shop to announce Martin Luther King Jr. had been shot.

“The tears were everywhere. Everybody’s crying. Everybody’s so sad. And just not able to comprehend what’s going on,” Virginia says. “Finally, that sadness turned into frustration. And the frustration turned to anger. And the uprising began.”

Ben’s stayed open and unharmed during the unrest that tore through the neighborhood over the next four days. Stokely Carmichael, head of the Student Nonviolent Coordinating Committee, requested that the Chili Bowl remain open and serve food past the city-mandated curfew. The city obliged, Virginia says.

“We were the safe place for the first responders, for the police officers, the firemen, and even the activists — everybody felt safe coming into the Chili Bowl,” Virginia says. “That was stressful, to just say the least. It was very stressful to see your neighborhood going up in flames.”

While the restaurant had no “official” role as a center for community-organizing during the civil rights struggles of the 1960s, it did serve as an informal gathering place, says John DeFerrari, author of Historic Restaurants of Washington D.C.: Capital Eats. Carmichael regularly had meetings there.

“It was a place that everyone knew. Everyone loved the food there, and people did meet there,” DeFerrari says. “Ben and Virginia Ali were definitely very connected with the community. So Ben’s definitely served as a kind of social glue for the African-American community in those years.” 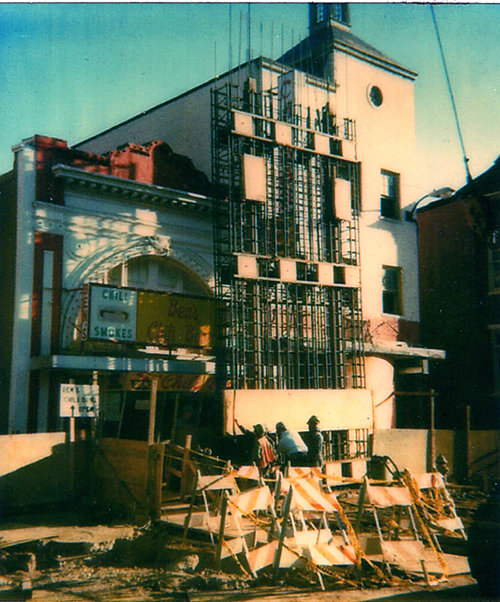 In the late 1980s, construction on the Green Line tore up U Street.

Many area businesses never reopened after the riots, but Ben’s kept its lights on. Through the 1970s and 1980s, as many black middle-class families traded the city for the suburbs and the neighborhood struggled, Ben’s stayed open. And when construction for the Green Line tore up U Street in the late 1980s, the Alis created a detour in the alley for restaurant access.

Housing developments in the coming years “couldn’t go up fast enough,” Virginia says, as the neighborhood again flourished, albeit as part of a larger trend of gentrification in the city.

“The neighborhood is back. It’s just affluent and different. But it’s back,” Virginia says.

In 1970, the African-American population in the city stood at 71%. Five decades later, it’s less than half.

Ben’s has remained a destination in D.C., still hosting locals, tourists, late-night revelers and more than a few lawmakers. Its famous mural (repainted in 2017, removing the original’s inclusion of Bill Cosby) makes frequent cameos on Instagram.

“Every politician in the city will tell you, if you don’t have your meetings at Ben’s Chili Bowl, you’re not really a serious politician,” Bernard Demczuk, African-American studies lecturer and the restaurant’s historian, told Zagats in 2014. 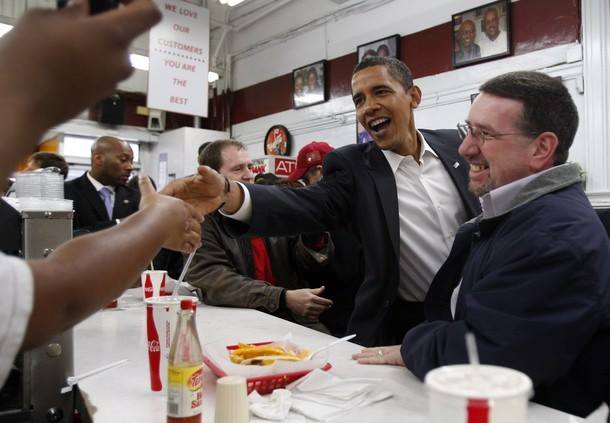 Then President-Elect Barack Obama stopped by the Chili Bowl days prior to his inauguration in 2009.

The hours at Ben’s have been cut. Sales have dropped 80 percent. And just 15 of its 65 team members are working.

Vida Ali, Virginia’s daughter-in-law, whom the family matriarch says “does everything” at the business, says the family hasn’t yet fully assessed the damage from coronavirus.

“Right now, our focus is more on taking care of the team members, the guests and just making sure everyone stays safe and healthy and the doors stay open,” Vida says. “We’re trying to keep that legacy going that we will never close, and so even though there’s uncertainty and unknown, we’re giving it our best shot.”

Since the restaurant’s plight was publicized on ABC News, it has received an outpouring of support, Vida says. Last week, Sen. Kamala Harris, who attended Howard University in the 1980s, said Congress should “prioritize helping minority-owned businesses.”

The family applied for a loan with the Paycheck Protection Program, a potentially forgivable loan of up to $10 million for small businesses as part of the recently passed CARES Act, but learned their application was not approved before the first round of funding ran out. On Tuesday, the family was notified that it will be receiving a loan from the program, which was injected with another $310 billion late last week.

Though Vida says the Alis are “definitely thankful,” the loan will still likely need to be paid off. And she remains concerned about moving forward.

“We have to assess the loss,” she says. “How do we get back to business?”

Part of that assessment is figuring out just how long the business can keep running with its satellite locations closed and only a small percentage of its prior revenue.

“It’s a juggling act right now in terms of, ‘OK, what’s coming in? What’s needed? What must we pay? What can hold?,” Vida says. “Some of the other small businesses need their money, vendors and so forth. It’s hard because they’re small too.”

As family members try to avoid coming to terms with their new economic reality, they’re once again serving the community. They’ve launched a campaign benefiting first responders. But as neighbors and other Chili Bowl fans offer to start crowdfunding campaigns, the family has turned them away.

“The way we look at it is, everyone is hurting right now. So it’s not just Ben’s, it’s not just small businesses,” Vida says. “Every individual has been hit, right? So then when they call we’re like, ‘No, we’re all in this together.’”

Online courses under $11 to make you a faster, smarter entrepreneur

Starting and growing a business from scratch isn’t easy. Even the smartest, most ambitious entrepreneurs encounter obstacles to overcome. Sometimes what’s needed to get to that next level is a little extra know-how. With this […]

ETI has three simple ways to raise your credit score

Americans, on a whole, actually have pretty good credit scores. Nearly six in 10 Americans have what’s considered a “good” credit score or better, according to credit bureau Experian. That’s a 703 FICO score, in case […]

Not so long ago, Kevin Curry was living with his parents in Dallas—he’d lost his tech job and his savings in the 2008 crash—and was struggling with chronic depression. His doctor prescribed him antidepressants, but the pills […]