The Hollywood Walk of Fame may have begun its life as a Chamber of Commerce marketing tactic, but today it’s one of Los Angeles’s most famous tourist attractions, drawing an estimated 10 million visitors each year. As a host of new celebrities, from Minnie Mouse to Mark Hamill, get ready to make their (permanent) mark along Hollywood Boulevard in 2018, here are 25 things you might not know about the world’s most star-studded sidewalk. 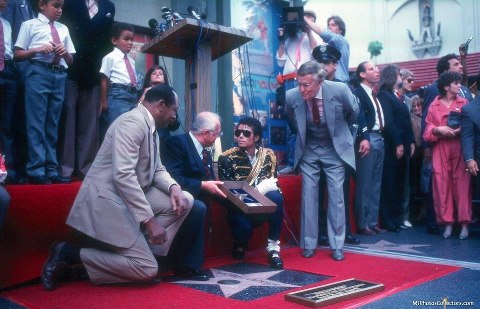 The original idea for the Walk of Fame came from the Hollywood Chamber of Commerce’s volunteer president E. M. Stuart in 1953, a full seven years before construction began. According to a press release issued that year, he proposed the idea as a marketing tactic to “maintain the glory of a community whose name means glamour and excitement in the four corners of the world.” It wasn’t until January 1956 that an official proposal was submitted to the Los Angeles City Council.

It took a while to settle on a concept and color scheme. Among the renderings put forth were a star that included a caricature of the honoree, planted along brown and blue sidewalks. Both ideas were eventually nixed—the caricatures because of the difficulty involved and the colors because they clashed with a building that real estate developer C.E. Toberman, a.k.a. Mr. Hollywood, was erecting on Hollywood Boulevard.

3. ONLY FOUR TYPES OF INDUCTEES WERE ORIGINALLY CONSIDERED.

Though today there are five categories of inductees, in the Walk of Fame’s earliest days there were just four: Motion Pictures, Television, Recording or Music, and Radio. It wasn’t until 1984 that a category for Theatre/Live Performance was added.

Though construction on the official Walk was set to begin shortly after the sneak peek of those first eight stars, two lawsuits prevented that from happening. The first came courtesy of a group of nearby property owners who did not take kindly to the $1.25 million tax assessment that came with the Walk’s construction. The judge ruled against them. The second came from Charlie Chaplin, Jr., who demanded $400,000 in damages because his father was not chosen as an honoree. The case was dismissed in 1960, though the elder Chaplin did finally get a star in 1972 (the same year he won an honorary Oscar).

After all of the delays, construction on the Walk of Fame officially began on February 8, 1960. Filmmaker Stanley Kramer—director of The Defiant Ones, Inherit the Wind, Judgment at Nuremberg, and It’s a Mad, Mad, Mad, Mad World—was the first honoree to have his star laid. It was installed on March 28, 1960.

7. MOVIE STARS MAKE UP THE BULK OF THE WALK.

Of the 2,600-plus stars that currently make up the Walk of Fame, 47 percent of them are in the Motion Pictures category, followed by Television (24 percent), Music (17 percent), Radio (10 percent), and Live Performance (less than 2 percent).

In 2002, Muhammad Ali was given a star when it was determined that boxing was indeed a form of live performance. Ali’s star is the only one on the Walk of Fame that you cannot step on; at the athlete’s request, it was installed in the wall of the Dolby Theatre (then the Kodak Theatre) because, according to The Guardian, the legendary athlete didn’t want his name walked on by “people who have no respect for me.”

9. ANYONE CAN NOMINATE A CELEBRITY FOR A STAR—BUT THE STAR MUST AGREE.

Stars on the Walk of Fame don’t grow on trees. Nor do they come free. Every nomination application must also list a sponsor for said nominee, who agrees to cover the $40,000 [PDF] it costs to create, install, and maintain the star, which is made of terrazzo and brass.

11. POSTHUMOUS NOMINATIONS ARE ALLOWED, BUT THERE’S A CATCH.

Of the approximately 24 stars dedicated each year, one is given posthumously—but only if the star in question has been deceased for a minimum of five years.

12. ATTENDING THE STAR’S UNVEILING IS A REQUIREMENT.

Since 1968, the honoree’s attendance at his or her star’s unveiling is required. The only person to have challenged this rule is Barbra Streisand, who was awarded a star in 1976. (Rumor has it that she wasn’t comfortable with the crowds?) With no Babs in sight, one reporter took it upon himself to instead interview her wax figure at the nearby Hollywood Wax Museum. In 1998, Streisand did show up to support her husband, James Brolin, when he received his own star.

In 1994, the stars of approximately 450 celebrities—Elvis Presley, Marilyn Monroe, Walt Disney, Bob Hope, Groucho Marx, Gene Kelly, Arnold Schwarzenegger, and that pesky Charles Chaplin among them—were packed up and put away into storage for approximately three years to allow for the construction of two new subway stations on Hollywood Boulevard.

Celebrities are not limited to just one star: Bob Hope, Roy Rogers, Mickey Rooney, and Tony Martin each have stars in four categories. More than 30 people have stars in three categories, including Bing Crosby, Dean Martin, Frank Sinatra, and Jack Benny.

Legendary entertainer Gene Autry is the only celebrity to have a star in all five Walk of Fame categories.

16. THERE ARE TWO HARRISON FORDS AND TWO MICHAEL JACKSONS.

And no, they’re not the same people: Silent film actor Harrison Ford earned a star in 1960 while Harrison “Han Solo” Ford got his in 2003. Radio personality Michael Jackson and the King of Pop both earned a star in 1984. When Jackson (the Thriller one) passed away in 2009, a huge crowd of fans gathered to pay tribute to him … at the wrong star.

There are 16 fictional celebrities with Walk of Fame stars (more if you count The Muppets as multiple characters); Mickey Mouse was the first to be inducted in 1978. Bugs Bunny, Snow White, Woody Woodpecker, Big Bird, The Simpsons, Rugrats, Kermit the Frog, Donald Duck, Godzilla, Winnie the Pooh, The Munchkins, Shrek, Tinker Bell, The Muppets (meaning that Kermit and Big Bird actually have two stars apiece), and Snoopy followed. By the end of this year, that number will be up to 17: Minnie Mouse will be getting her own star in 2018.

18. FOUR STARS HAVE BEEN STOLEN.

In 2005, Gregory Peck became the fourth celebrity to have his star stolen from the Walk of Fame. Though it was replaced immediately, the original star has never been recovered. Five years prior to the Peck theft, Jimmy Stewart and Kirk Douglas’s stars disappeared; they were recovered from the home of a construction worker who had been tasked with securing them. One of Gene Autry’s stars was also stolen (but he had stars to spare).

19. THERE’S A TIME CAPSULE UNDER THE WALK OF FAME.

As part of the Walk of Fame’s 50th anniversary celebration in 2010, the Hollywood Chamber of Commerce buried a time capsule in the same place the Walk originated, at the corner of Hollywood and Highland. Price is Right icon Bob Barker was on hand to help bury the capsule, which contains various items that commemorate the landmark, plus a note from Barker himself that reads: “Have your pets spayed and neutered.” Here’s hoping the people of 2060—the year the time capsule is set to be opened—get the reference.

20. THE DERN-LADDS ALL RECEIVED A STAR AT THE SAME TIME.

Also as part of the 50th anniversary celebration, three members of a single Hollywood family received stars at the same time when Bruce Dern, Diane Ladd, and Laura Dern were feted—a first for the Walk of Fame.

21. THE BARRYMORES HAVE THE NUMBERS.

As far as acting dynasties go, the Barrymores will be tough to beat. There are six stars among the family, including one each for John, Ethel, John Drew, and Drew and two for Lionel.

There have been a couple of typos in the Walk of Fame’s more than 50 years. In 2010, Julia Louis-Dreyfus showed up to smile over a star dedicated to “Julia Luis Dreyfus.” The Veep star, unsurprisingly, was rather amused by the mix-up, telling reporters, “The misspelling was so perfectly apt, a great metaphor for show business. Right when you think you’ve made it, you get knocked down. It’s an ideal metaphor for how this business works.” The star was quickly replaced and the typo version was sent to Louis-Dreyfus as a souvenir.

Dick Van Dyke had a similar experience in 1992 when his last name was spelled as “Vandyke” (that error, too, was quickly rectified).

23. SOME TYPOS WERE PROPHETIC.

Confusion arose when actor Don Haggerty was awarded a star in 1960 that was engraved as Dan Haggerty. Though it was eventually replaced with a corrected version, in 1994 Grizzly Adams actor Dan Haggerty received his own star.

24. HONOREES HAVE FIVE YEARS TO SCHEDULE THEIR CEREMONIES.

As such, some people use their dedication ceremonies as a way to promote an upcoming project. “Stars like to make it a big deal,” Hollywood Chamber of Commerce president/CEP Leron Gubler told The Huffington Post. “That’s the way they are. They get a little more bang for their buck out of it when they time it right.”

Tom Hanks credits much of his success today to his two friends: George Maguire and MichaelJohn McGann, the actor wrote in a new essay for AARP the Magazine. The three met working in Cleveland with […]

ETI’s Little Known Fact about the classic film The Godfather