The first 2020 presidential debate between President Donald Trump and former Vice President Joe Biden brought a lot of shouting, tense exchanges and insults. Amid that, their answers to moderator Chris Wallace’s questions included some truths, misleading statements and flat-out falsehoods.

Here’s a look at some of the flashpoints:

On the coronavirus pandemic

When the coronavirus came up, Biden accused Trump of not having a plan. Trump noted that even Dr. Anthony Fauci, the nation’s leading infectious disease specialist, had said his approach had saved thousands of lives.

That is true. On July 31, Fauci told a House panel that Trump’s actions early in the pandemic, like travel restrictions, did save lives. But many other experts have faulted Trump for his administration’s failure to develop a national testing strategy and for the president’s mixed messages on the virus’ severity.

Trump also pointed out that Democratic governors had praised his response, saying he’d done a “phenomenal job.” While they may not have used those exact words, it is true that governors, including New York Gov. Andrew Cuomo and California Gov. Gavin Newsom, thanked the White House early in the pandemic for being responsive.

The president then criticized the Obama administration’s handling of the swine flu.

“Well, you didn’t do very well in swine flu. H1N1, you were a disaster,” Trump said.

But that is not a fair comparison.

The 2009 swine flu pandemic infected an estimated 60.8 million people in its first year, according to the Centers for Disease Control and Prevention, versus about 5 million COVID-19 cases confirmed in the U.S. And the H1N1 pandemic in 2009 caused a stir, even shutting down some schools. However, the comparison lacks important context about the severity of each virus. While the swine flu spread easily, the virus had only a fraction of the fatality rate of COVID-19.

Biden pointed out the president encouraged people to ingest bleach. Trump said he made that remark as a joke.

Amid the COVID-19 portion of the debate, the use of masks came up. Trump pointed out that Fauci at first said masks were no good, then changed his mind.

That is partially true. Early in the pandemic, Fauci and other public health officials discouraged the use of masks, saying they should be reserved for health workers.

By April, the CDC had changed its guidance, recommending that Americans wear at least cloth masks when in public.

Fauci has said his initial recommendation was based on the scientific understanding of the virus at that time and concerns about a shortage of personal protective equipment for those on the front lines.

“We were told in our task force meetings that we have a serious problem with the lack of PPEs and masks for the health providers who are putting themselves in harm’s way every day to take care of sick people,” Fauci said in an interview in July. “When it became clear that the infection could be spread by asymptomatic carriers who don’t know they’re infected, that made it very clear that we had to strongly recommend masks.” 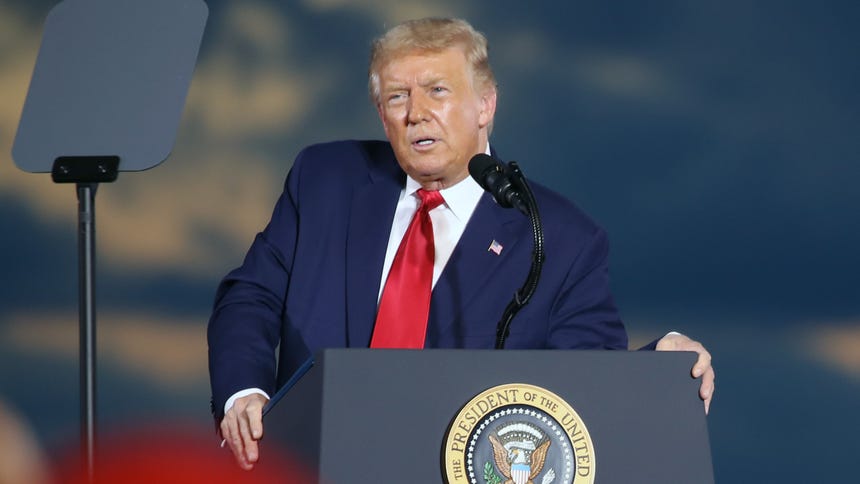 Biden and Trump argued over campaign rallies, with Biden hitting the president over holding large events amid the pandemic. Trump said his rallies have had no adverse effects.

That is not true.

His first campaign rally after the pandemic started was in June in Tulsa, Oklahoma. Tulsa’s top health official said that event was “likely” a contributing factor in an ensuing surge of cases in the city. Former GOP candidate Herman Cain attended that rally and later died of COVID-19.

As for crowd size at Trump’s events, the president’s assertion isn’t even close. The Tulsa event had just over 6,000 people. Events since then have had an average attendance of 7,000 to 9,000 people.

Trump said the former vice president couldn’t get a crowd at his rallies. In fact, Biden’s campaign has kept events intentionally small to prevent coronavirus infections.

Did Biden describe the military as ‘stupid bastards’?

That is misleading. In a 2016 visit to an air base near Abu Dhabi, United Arab Emirates, Lt. Karen Johnson – a native of Wilmington, Delaware – introduced Biden to the rest of the troops, per a video from The Washington Examiner.

“Notwithstanding what you may hear about me, I have incredibly good judgment,” Biden remarks in the video. “One, I married Jill. And two, I appointed Johnson to the academy, I just want you to know that.”

After that remark, expecting applause, Biden encouraged the troops to clap for Johnson in part by calling them “stupid bastards.” Once they began to applaud, he continued, “Man, you are a dull bunch. Must be slow here, man.”

Andrew Bates, a spokesman for his campaign, said it was a joke.

“Vice President Biden was jokingly encouraging the audience to clap for an airwoman on the stage, and a number of service members can be seen laughing and smiling at the comment. Seconds before, he praised them for ‘the incredible sacrifices (they) make for our country,’” Bates told The Daily Beast.

Where did Biden go to college?

Trump  said Biden has misstated where he went to college, claiming Biden said he went to Delaware State University, the state’s only historically Black college.

This past week, conservative media outlets reported that Biden falsely said he attended Delaware State. Those reports are incorrect. The statement made by Biden was taken out of context.

Biden said he got his “start” at DSU during a town hall in Florence, South Carolina, ahead of the 2019 primaries. The video clip has been circulating the internet after a reporter from The Washington Times asked DSU officials if Biden ever attended the school.

In the video, the former vice president was not implying that he attended the university but rather referring to the support he received from the school when he announced his bid for the U.S. Senate on the DSU campus in 1972, university spokesman Carlos Holmes said.

Law and order was a contentious subject at the debate as the candidates sparred over who can best keep Americans safe at a time of national reckoning over police violence against African Americans.

“Law and order with justice where people get treated fairly,” Biden said. “And the fact of the matter is violent crime went down 17%, 15% in our administration. It’s gone up on his watch.”

The Detroit Free-Press found the statistic to be accurate, though only relating to the rate of change in violent crime; the total number of crimes was about 10% lower than when Obama took office.

Meanwhile, when Trump was pressed by Wallace on why homicides spiked this summer, Trump claimed “53 people were shot and eight died” and claimed that crime in New York City was up by as much as 200%.

The president was accurately referencing a Sept. 8 shooting in Chicago that killed eight people. Statistics from the New York Police Department also show that shooting incidents increased in the city by 177% in July compared with last year, though other forms of crime were down.

Trump’s claim that violent crime is rising only in Democratic cities, however, is a stretch. Violent crime has risen in both Republican and Democrat-led cities, according to FBI data and other independent research.

The safety of voting by mail was the topic of the final segment of the debate. Trump declared ballots to be “a disaster,” saying “solicited” ballots – presumably those requested by a voter, often called absentee ballots – are OK. “You’re soliciting. You’re asking. They send it back. You send it back. I did that.” He followed up with the assertion that other types of mail-in ballots are fraudulent. He said that in some areas, “everybody got two ballots.”

All mailed ballots must be verified to be counted – whether or not they are absentee or mail-in ballots. The only difference between the terms is the process. Voters have to request absentee ballots, while voters states with universal mail-in systems do not require registered voters to request ballots. Officials just send them automatically.

Several states have voted entirely by mail for as many as 20 years with fraud cases being an extreme rarity, and states have protections in place to ward against election fraud.

The beginning of the end of airline change fees? United is ditching them for good – with a major catch

Changing a nonrefundable airline ticket has long been a pricey exercise on most airlines. Need to move your dates or times or even destination? Fork over at least $200 per person, on top of any fare difference […]

Don’t forget you can log on www.ETInside.com to watch Coachella 2019 live as it happens. Coachella takes place from April 12-14 and April 19-21. You can watch each performance live on your cellphone, tablet or […]