Physically, Paul Heyman and Brock Lesnar could not be any more different.

From a personality standpoint, Paul Heyman and Brock Lesnar could not be any more different.

Examining their backgrounds, Paul Heyman and Brock Lesnar could not be any more different.

Those differences are exactly why Heyman and Lesnar are the perfect fit together and have been for the better part of two decades. While neither man was asked to leave his place of residence when they linked up in 2002, Lesnar and Heyman became sports entertainment’s version of Felix Unger and Oscar Madison — WWE’s very own “Odd Couple.”

Heyman, the son of a New York personal injury attorney, has been involved in sports entertainment since the 1980s. Once the creative force behind the beloved “Extreme Championship Wrestling,” there are few people who know more about or are as influential in the industry. 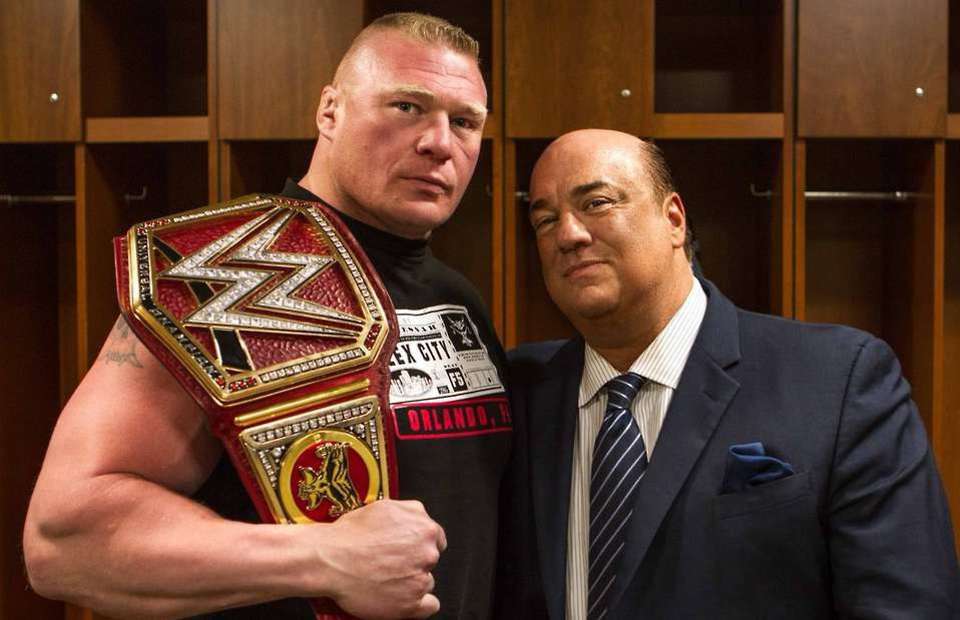 Blessed with the gift of gab, Heyman is must-see television whenever he picks up a microphone. Whenever he starts a promo with his patented “Ladies and gentlemen,” introduction, it’s time for the crowds in the arena and fans watching at home to listen — once they finish mimicking him.

“I always know how I’m ending [when I prepare and cut a promo],” Heyman told ETInside. “I know the point that I’m making — the big finish — how I’m getting to the big finish and what’s the turning point that takes me home. In crafting any promo it’s a lot like when I grew up and I went and watched my father, who was a personal injury attorney, perform in front of juries. It’s where I get the name advocate from, because my father was an advocate. I watched my father make the case and that’s what I try and do in terms of promos, I try and make the case.”

Lesnar, on the other hand, is must-see television for a much different reason. Easily one of the most accomplished athletes in history, Lesnar captivates audiences with his menacing presence and destructive ability in the ring. Lesnar, who grew up on a farm in South Dakota, is a man of few words, one who would rather let his physicality do the talking.

Despite these differences, Heyman and Lesnar have developed a relationship that extends beyond what fans see on WWE programming. The two men, polar opposites in many ways, are connected in a way that Heyman describes a “once-in-a-lifetime.”

“The respect, admiration and the honesty between Brock Lesnar and Paul Heyman is 100 percent authentic,” Heyman said. “We are fantastic business partners, associates and best of friends because we are violently honest with each other, no punches pulled, no sensitivities honored, uninhibited approach to both business and friendship in which anything can be said as long as it’s heartfelt.

“That has always been the way between us, since the first day we met. I cannot imagine having that level of openness with anyone else of Brock’s stature and I don’t know if he could trust getting that openness from anyone else except the person that has been with him since the day that he debuted on WWE television. It’s a lot like everything else involving Brock Lesnar, it’s quite unique, different from anyone else, it doesn’t fit any standard definition.”

That level of trust and closeness is what helped Heyman and Lesnar pull off one of the biggest surprises of the year in sports entertainment last Sunday. As the “Money in the Bank” pay-per-view was in its closing moments, Lesnar’s music hit and the multi-time champion sprinted out to the ring to capture the Money in the Bank briefcase, shocking fans and thrusting himself back into the spotlight in WWE.

“It’s never difficult to pull off a surprise involving Brock Lesnar because we know how to keep the circle very tight,” Heyman said. “We pulled it off with not one person figuring this out, not one person offering a spoiler online or anywhere else and we once again demonstrated that Brock Lesnar knows how to dominate headlines better than anyone else in WWE, sports entertainment or mixed martial arts.”

Although Lesnar is the one doing the physical portion of the job, Heyman is pivotal to Lesnar’s success.

As Lesnar’s advocate, Heyman helps stoke the flame when it comes to WWE’s fan base. Despite sections of the wrestling fan community voicing their frustration with Lesnar — who gets knocked for being a “part-timer” — the “Beast Incarnate” relishes in the fact that he can so easily rile up thousands.

“Brock Lesnar enjoys box office,” Heyman said. “If there was more box office in Brock Lesnar doing a 5 hour ladder match against 500 members of the past and present WWE roster and having to outperform each and every one of them, that would make Brock Lesnar happy.”

It’s hard to say whether or not the fans’ knocks against Lesnar are entirely justified. On one hand, yes, Lesnar does not work the same schedule as the rest of WWE’s stars. On the other hand, there’s truly no athlete in the WWE locker room who boasts the kind of resume Lesnar, a former NCAA, UFC and WWE heavyweight champion, does.

Lesnar’s polarizing character and his crossover appeal are exactly why WWE continually turns to him when it’s promoting major events and why the company is looking to him — and Heyman — to boost ratings. 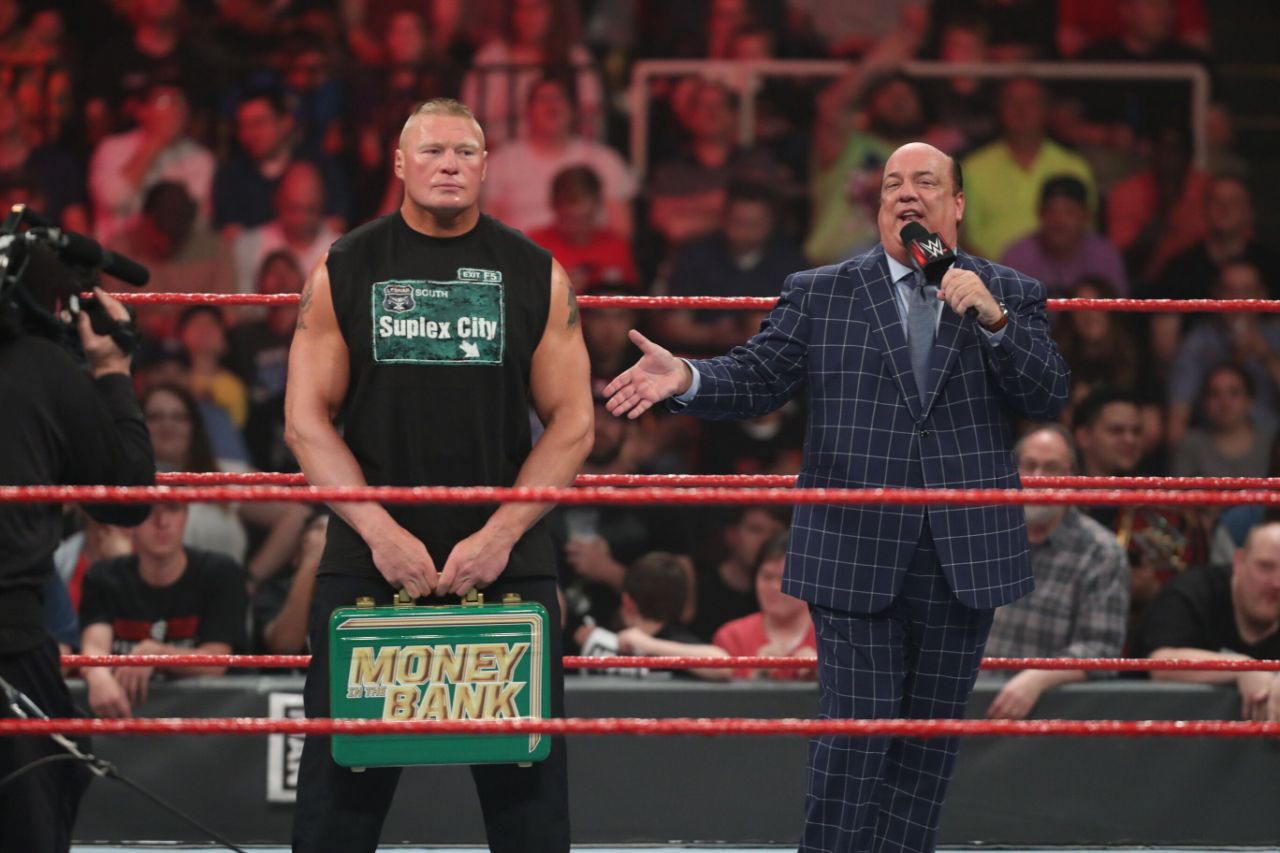 “I think the general public and even those who aren’t fans of Brock Lesnar but admire his greatness, don’t truly have the mindset of understanding how unique and how rare and how once-ever Brock Lesnar truly is,” Heyman said. “Brock Lesnar is so important to WWE because no one on the face of the planet can match up against Brock Lesnar. There is no one on any roster in mixed martial arts or sports entertainment that can compare to the resume, the accomplishments or the ability of Brock Lesnar. He’s a once-ever athlete and a once-ever performer.”

Lesnar, 41, is a much different athlete than he was when he first came to WWE nearly two decades ago. Despite no longer utilizing high-risk, top-rope maneuvers, Lesnar has been able to tell stories in the ring in an effective and compelling manner. His series of matches against The Undertaker as well as his two most recent “Survivor Series” bouts against A.J. Styles and Daniel Bryan have showcased some of Lesnar’s unique ability.

Heyman, a marketing genius outside of WWE as well, will sell you on that point as well.

“I think Brock Lesnar is the most underrated, underappreciated talent in the history of WWE,” Heyman said. “I think Brock Lesnar deserves credit for being the best in-ring performer in this or any other generation. No one moves like him, no one has matches like him. There’s nothing standard about a Brock Lesnar match. It’s a completely different style than anyone else is employing.”

Holding the Money in the Bank briefcase means that Lesnar now has his choice at either top champion in WWE. Historically, the person holding the briefcase will wait for an opportune time to “cash-in” and (most times) win a championship, but Lesnar and Heyman will announce their plans this Monday night on “Raw.” 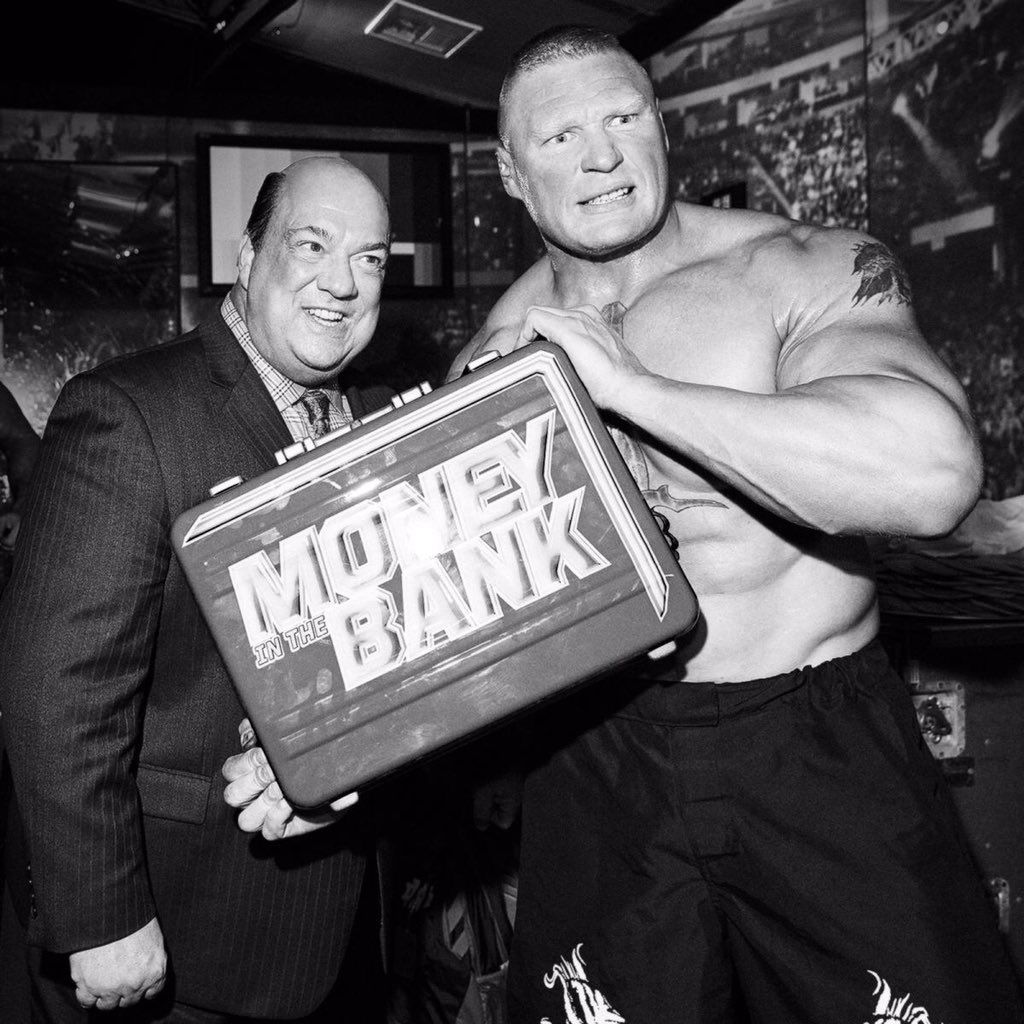 Should Lesnar and Heyman choose Rollins as his opponent — in a match that will likely take place next month at WWE’s Super Showdown event in Saudi Arabia — it will be the culmination of a storyline that started more than four years ago when the roles were reversed and Rollins cashed in on Lesnar.

“We are playing the reveal, the champion Brock will focus on, tight enough that the Friday before the revelation, I’m being interviewed by ETInside who doesn’t have the answer,” Heyman said. “Usually by now there are spoilers everywhere and no one has the answer to this one.”

Although it seems as if WWE’s odd couple are the only ones who know the future, when Lesnar walks out on Monday night — likely using the prop briefcase as a “Beast Box,” a term Heyman, ever the salesman, coined — one thing is clear:

He won’t be alone.

What Colin Kaepernick really made on his NFL Collusion Settlement