The 2020 Essence Festival of Culture — which was scheduled to take place in New Orleans from July 1-5 — has been postponed due to concerns about the coronavirus outbreak.

On March 10, the festival posted a message on social media announcing it was still selling tickets. But on Friday, March 27, organizers said the event would be postponed.

“Based on developments over the past couple of weeks, including updates from our city and health partners, we are officially announcing that we will move the 2020 ESSENCE Festival of Culture closer to the fall,” the festival tweeted. “As we previously indicated, we were already moving forward with identifying and securing alternate dates and will be prepared to announce those shortly.”

Based on developments over the past couple of weeks, including updates from our city and health partners, we are officially announcing that we will move the 2020 ESSENCE Festival of Culture closer to the fall. Visit http://ow.ly/BTAT50yYgFs  for the full statement. #EssenceFest 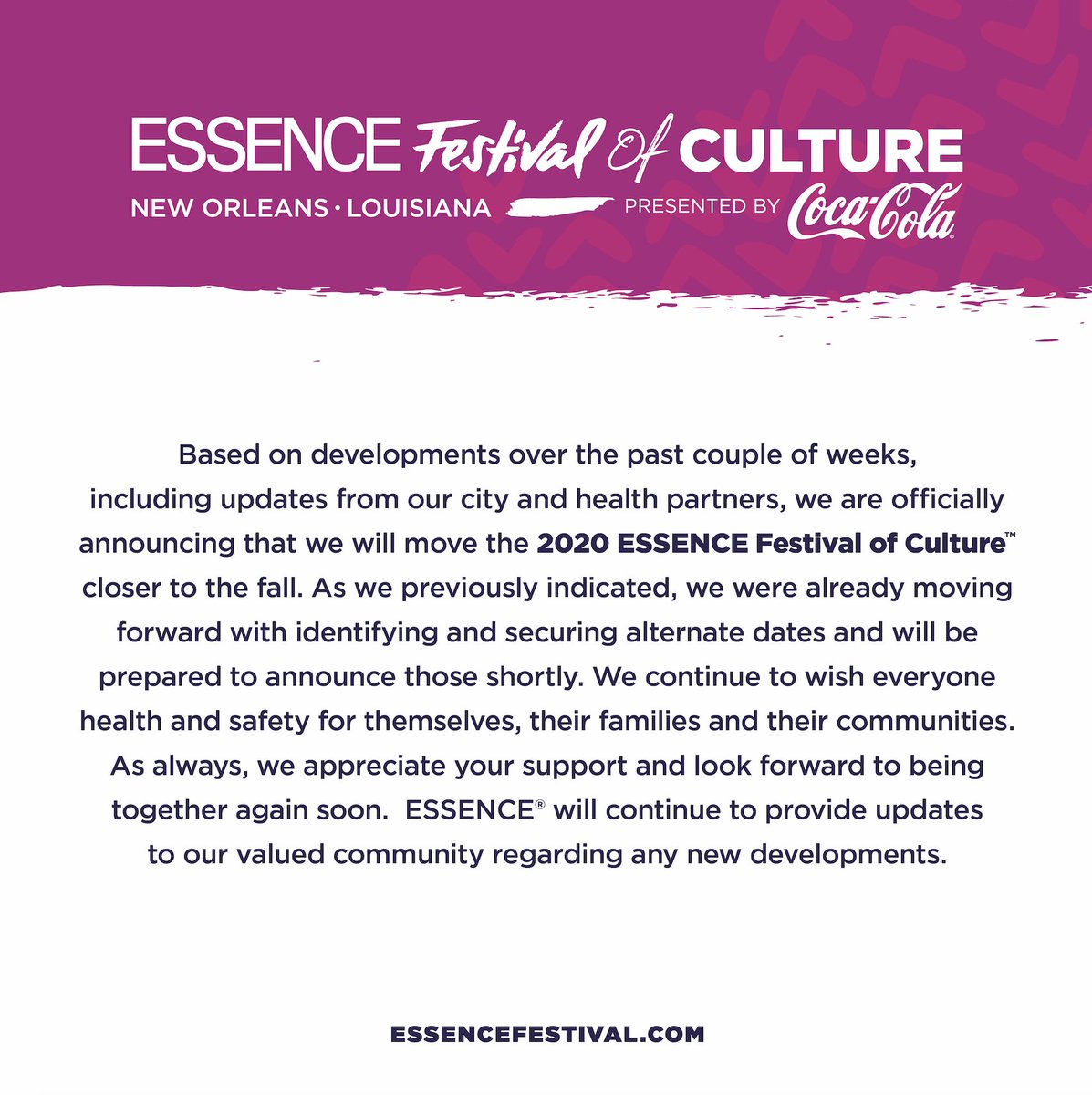 231 people are talking about this

Bruno Mars and Janet Jackson had been set to headline the festival. Once a new date is scheduled, it’s unclear if the lineup will remain the same.

“We greatly appreciate the Essence family for working with the City of New Orleans and Louisiana as we face this ongoing public health crisis,” said Edwards. “We have enjoyed a long-standing relationship with the Essence family and look forward to continuing the celebration later this year.”

Earlier in the day, Edwards announced COVID-19 cases in the state had surged.

“Louisiana has experienced the fastest rate of increase for confirmed COVID-19 cases in the world, and it is imperative that everyone in our state take part in the efforts to slow the spread of this disease,” he said in a statement.

According to figures posted Saturday afternoon by the Louisiana Department of Health, there have been 3,315 cases of COVID-19 reported in the state and 137 deaths.

The public’s fascination with Michael Jackson continues. On what would have been his 61st birthday, it’s being reported that the King of Pop was once confronted by his friend Marlon Brando over the child abuse […]

Joe Biden’s choice of running mate has been the subject of massive speculation over the last week. But even though the presumptive Democratic nominee said he would announce his vice presidential pick in the first […]

After six months as a co-host on The Real, Amanda Seales is leaving the show. The 38-year-old actress announced her departure during an Instagram Live on Tuesday explaining that she wasn’t able to fully use […]